Your first entrance in the Palestinian Occupied Territories from Israel could be impressive, it is up to you to decide whether the impression could be positive or not.

The monumental wall separating Jerusalem from the West Bank, erases from your sight the whole imaginary of olive trees and yellow lands, replacing it by grey horizontal bricks made of concrete: from each and every brick, you can hear an illusory voice screaming “the entrance here is forbidden and against Israeli law”. 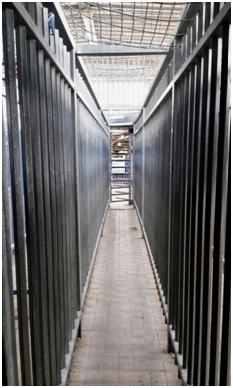 The sight of that grey monster chasing you along the journey, calls from within feelings of regret, disappointment, despair into being, because this is likely not the Palestine you imagined. Nevertheless, those few minutes it takes to go through iron cages, passport controls, traffic and urban noise, opens your view and your expectations to a completely different scenery. Not yet dabkeh and olive trees, but peddlers of any kind of good, kids who run around you, trying to catch your attention for bargaining lighters or lollipop, mothers and children waving hands from faraway balconies, dozens of young men and women in a worried hurry before their passage through the checkpoint.

Then, going ahead towards the city, as the service runs along, a kaleidoscopic landscape can be perceived, made of palm trees, high building, and refugee camps. Indeed, this is a first introduction to the complex and critical aspects of the occupation. 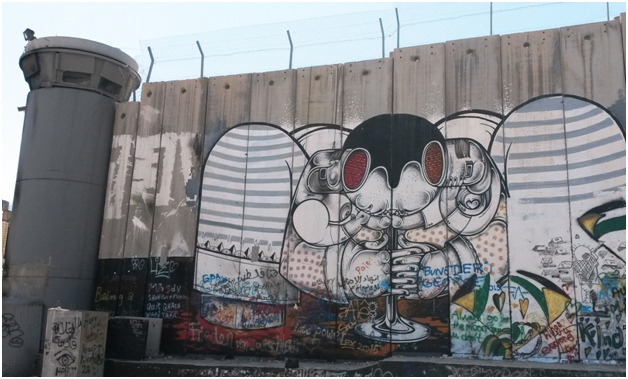 Just after the cease of Second Intifada, from 2003 Palestine has been enclosed by walls and fences, designed to protect Israeli state from the illusory enemy of Palestinian violence. Since then, cities like Qalandiya, Qalqilya, Bethlehem, and others, are prisoners of tons of grey concrete and barbed wire. As a new step in the occupation process, it dragged the whole West Bank into new forms of displacement and restriction of movement, factually splitting the region into disconnected areas, and blessing all the inner contradiction to be exacerbated.

Palestinians reacted,  many times , with unexpected moves:  turning the monster into a “canvas” for intense graffiti like the ones in Bethlehem; climbing over the high bricks during Ramadan just to reach al-Aqsa for the Friday prayer, and losing their own life instead, protesting every Friday against a closer and closer trespassing in Bil’In.

The wall is, as a matter of fact, a physical boundary, but is not yet a state of mind. Fences did not surrounded hope as the occupation cannot wipe out any wish to look further. It weighs the burden down changing the face of resistance. 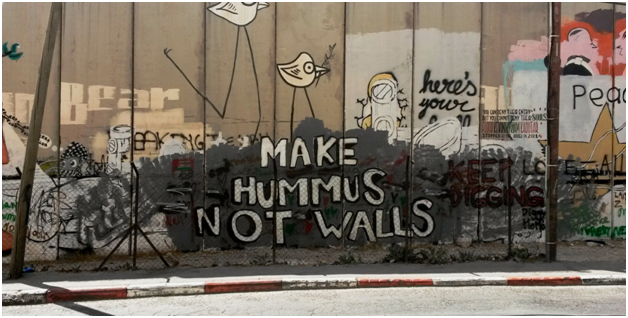 No one knows how separation would affect Palestinian commitment in the long run. For us, passive audience in a controversial play, on the Palestinian flank, those same grey and high bricks do not state “the entrance is forbidden”, they scream out loud “this wall will not exist anymore”.

And beyond this wall? A never-ending sea, Gaza and the land of Return.