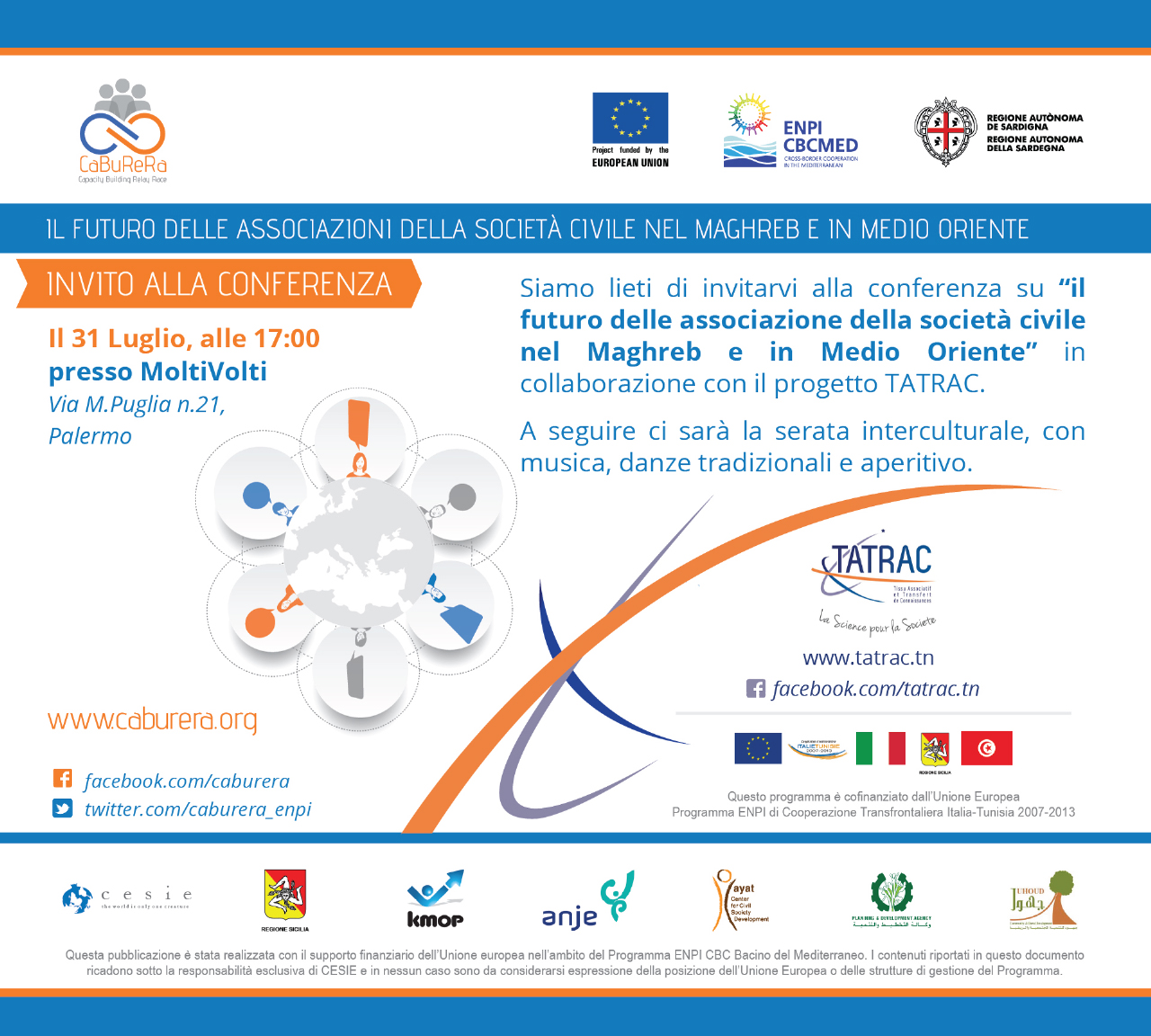 “The future of the associations of the civil society in Maghreb and in the Middle East”: conference and event in Moltivolti

In the framework of the CaBuReRa (Capacity Building Relay Race) and TATRACTissu Associatif et Transfert de Connaissances [Network of Associations and Knowledge Transfer]) projects, the conference called “The future of the associations of the civil society in Maghreb and in the Middle East” will be held on Friday, the 31st July at 17:00, in Moltivolti (via M. Puglia, 21, Palermo).

In the framework of the ENPI programme (European Neighbourhood and Partnership Instrument) and thanks to a total budget of € 1.680.000, funded at 90% by the European Union, CaBuReRa develops a training, exchange and networking project. CaBuReRa wants to contribute to the development of a Mediterranean network between youth, local authorities, public authorities and education protagonists in order to facilitate the school-to-work transition and promote active citizenship and intercultural dialogue through mobility experiences. In such context, the project will involve 30 Youth Workers and 60 Young Unemployed, who will carry out a period of mobility in Italy, Greece, Portugal, Jordan, Lebanon and Palestine.

TATRAC (Tissu Associatif et Transfert de Connaissances [Network of Associations and Knowledge Transfer]) is on the other hand a cross-border cooperation project funded by the ENPI programme Italy-Tunisia 2017-2013. The project aims mainly at encouraging the civil society to take up an active role in the innovation process, by supporting the associations, enhancing scientific knowledge, sharing good practices and promoting the building of a culture of innovation.

Both projects will be presented during the conference held on the 31st of July, organized as a conclusion to the period of mobility carried out by the 10 young participants to the CaBuReRa project who performed volunteer services and did training sessions in Palermo during the last month. The conference will also be the occasion to put an end to the training sessions and the visits to which participated the Sicilian and Tunisian partners of the  TATRAC project from the 27th to the 31st of July 2015.

The 31st of July will thus be dedicated to intercultural values, associative work and exchange of good practices, to promote the development of a culture of innovation. The conference will be followed by an Intercultural evening, during which the 10 young participants to the CaBuReRa project, currently carrying out a mobility period in Palermo, will share their experience and culture through music, food and traditional dances from their own countries (Jordan, Lebanon and Palestine).