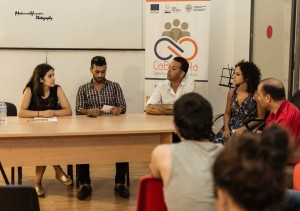 In the framework of the CaBuReRa  and TATRAC projects, a conference about “The future of the associations of the civil society in Maghreb and in the Middle East” took place on Friday 31st July in Moltivolti (via M. Puglia, 21 – Palermo). The conference – that represented also the final moment of the three days of visits and training sessions addressed to the Sicilian and Tunisian partners of the TATRAC project – was followed by an Intercultural Event. During that, the 10 CaBuReRa young participants who terminated their mobility period in Palermo talked about their home countries – Jordan, Lebanon and Palestine – and introduced themselves by means of music, cooking and cultural traditions.

The meeting was firstly aimed to reflect on the future of the organizations of the civil society in the Arab World, but wanted also to highlight the main points of  both the CaBuReRa and TATRAC projects, funded by ENPI programmes (ENPI CBC Med for CaBuReRa, ENPI Italy-Tunisia 2007-2013 for TATRAC). Rita Quisillo, coordinator of CaBuReRa, talked about this project that wants to contribute to the development of a Mediterranean network between youth, local authorities, public authorities and education protagonists in order to promote active citizenship and intercultural dialogue through mobility experiences. On the other hand, Abdelhamid Abidi, coordinator of the TATRAC project, focused his speech on the future of civil society in the Arab world especially after the Arab Spring.  Abidi claimed that the activism of civil society is an important instrument of democratization which depends widely on the participation of the youth. Agreed with this statement, three of the CaBuReRa participants – Muna Sbouh, Mohammad Alhasan and Diyaa Mubaideen – presented the current situation of Palestinian and Jordanian organizations for the civil society, focusing on differences and similarities among Arab countries.

The following Intercultural Event was a success, joined by a great number of people that really enjoyed the Arab food prepared by our CaBuReRa participants. It should be considered a fundamental step along the way of the Euro-Mediterranean cooperation, as well as an occasion of cultural growth not just for the youth!