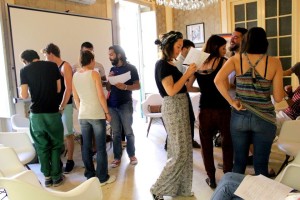 Hussein and Batoul belong to the group of 9 boys and girls coming from Jordan, Lebanon and Palestine who have just started their experience in CaBuReRa. They arrived in Palermo few weeks ago and they have immediately felt home. Hussein and Batoul are both members of TG2, the CaBuReRa Target Group made up of young unemployed people for whom CaBuReRa represents a valuable opportunity of human and professional development. The aim of this project is to help these people acquire complex skills in project management and international cooperation, a way to face youth unemployment in the Euro-Mediterranean area. Young people who have just arrived in Palermo are all graduates or near-graduates: they have decided to join the CaBuReRa project basically in order to make an international experience. But for them, CaBuReRa is more than this, as shown by Houssein and Batoul’s words.

Hussein and the importance of communication

Hussein is 26 years old and he comes from Lebanon. He is a student of IT and Computer Sciences at the University of Beirut, and he says that he decided to join the CaBuReRa project because he wished to improve his IT skills. But when he arrived at CESIE’s office, in Palermo, he found much more than this, and his enthusiasm is visible: he is learning a new language – Italian – and day by day he can appreciate a culture that he acknowledges as different but, at the same time, very close to his own. «Living abroad is a big challenge», he says, «but this experience is teaching me a lot: for example I start to know and appreciate new countries and their cultures, and I have also learned how to communicate with them. I like it so much!». In Lebanon, Hussein had already worked as a volunteer for Action Aid and Unicef: this previous experience, he says, allows him to further appreciate the work he is doing in Palermo. Indeed, Hussein and the other people involved in CaBuReRa are currently working as volunteers in some children centres which are located in town centre of Palermo; these centres are named Ubuntu, Santa Chiara and La Casa di tutte le genti. According to Hussein, what makes CaBuReRa a really valuable experience is the Relay Race, a core event of the project. During the Relay Race, the two target groups involved in the project – the Young Unemployed of TG2 ready to depart and the Youth Workers of TG1 coming back from one of the Partner Countries – meet with each other to discuss about their mobility experience, in a moment of peer-to-peer training aiming to promote active citizenship as well as intercultural dialogue. Everything is based on communication, and this is the feature of the project that Hussein likes the most.

«A place where I feel like home». The story of Batoul

Batoul, as Hussein, is Lebanese. She is 23 years old, and has a degree in Marketing and a strong will to make new experiences. In her words, CaBuReRa is a sort of springboard, the watchword opening labour market’s doors. «If you want to find a job, in Lebanon as in other parts of the world, a work experience abroad is an added value», she claims. For a person like her – who loves travelling, meeting new friends and learning foreign languages – CaBuReRa represents the opportunity for putting herself to the test and try to reach her own independence, both in personal and economic terms. What Batoul likes the most about her work in Palermo is the possibility to help children. The child centre she volunteers in reminds her about the one she attended as a child in Lebanon. According to her, the work that she does every day is a way to give back what she has received during her life. Putting in practice the highest and deep sense of the word communication: giving other people something important and everlasting. Batoul and Hussein are both highly satisfied with their experience in CaBuReRa. They say: «In Palermo we feel like home», a sentence that express much more than its instant meaning. And not just because Mediterranean cities are quite similar to each other, but rather because, in CESIE, Batoul and Hussein found a friendly environment, that allows them to acquire new skills and to give them back to those coming after them, in an long-lasting circle of communication.