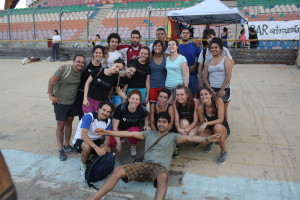 Took place in Palermo from 11th to 14th June 2015 the Mediterraneo Antirazzista, an event that brings together sport, art and culture, organised for the first time in 2008. Aim of this event is to promote intercultural dialogue and interaction between different cultures, by organising leisure activities addressed to people from different ages, and giving them an occasion to meet each other and share their experiences. This year also TG2 participants got involved in the CaBuReRa project took part in the Mediterraneo Antirazzista, and their enthusiasm in sport competitions has been really great.

It is usually claimed that diversity among people is a value, but sometimes in our cities we have to face critical situations that seem to deny this statement. Different cultures and lifestyles are often considered a threat to society and “the stranger” is seen as an enemy almost everywhere. Social exclusion and discrimination do not concern just migrants escaping from ethnic, economic or religious conflicts, but also those Italians who live in suburbs, where geographic marginality usually means social and economic exclusion.

CaBuReRa supports the Mediterraneo Antirazzista project and took actively part in it. Both projects are indeed aimed to promote an intercultural approach in our society as well as break some mental barriers like racism and social disadvantage through sport and cultural activities, seen as means of cohesion and socialisation. Only a strong network of relationships and human experiences can give people the opportunity to go beyond their prejudices and living peacefully with the others.