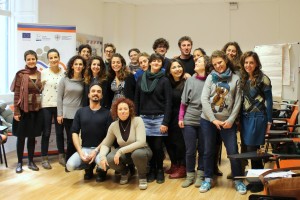 The Italian RelayRace event, the real heart of the CaBuReRa project, was held in CESIE offices between March 9th and 13th 2015. It consists in an exchange of abilities and knowledge that puts into practice the keywords of  this project: Cooperation, International Exchanges, Promotion.

Some useful information to learn about CaBuReRa

CaBuReRa is an ENPI CBC MED project co-funded by the European Union. Its aim is to encourage cooperation among the Euro-Mediterranean Countries, to face in a constructive manner the crisis of youth employment.

CaBuReRa also encourages its young participants in acquiring new skills, especially in the field of project management and international cooperation, by involving 90 under-35 participants in training activities and volunteering in the Partner Countries of the project (Italy, Portugal, Greece, Lebanon, Jordan and Palestine). The young people involved in the CaBuReRa project are divided in two Target Groups, called TG1 and TG2:

Relay Race is the core of this intense activity of knowledge exchange and enhancement of new skills. It is a 3-days event during which the TG1 group, just come back from the mobility experience, “relay” to the members of the TG2 group who is going to leave. This is an essential step which represents the soul of the CaBuReRa project and gives a tangigle proof of its success.

15 people aged between 25 and 30 years took part in the Relay Race held in Palermo last March. Italian members of the TG1 group just come back from their mobility experience in Jordan, Lebanon and Palestine met the young members of the TG2 group, who were leaving for the same destinations, giving them some useful advise based on their experience.

But the Relay Race is much more than a training course: it represents an opportunity of peer evaluation, where people can share the skills they have acquired with other people involved in the CaBuReRa project. In Palermo,TG2 members had the opportunity of talking about their expectations about the project: they received some useful advice from the TG1 members, in a valuable process of cooperation and, above all, communication. Young participants talked about their feelings, but also explained the reasons that pushed them to join the project. They said that CaBuReRa is not just a way to enrich their CVs, but it also represents a way to challenge themselves by facing different cultures and doing a real experience of cooperation.

Promoting the growth of a conscious citizenship and improving intercultural dialogue by circulating good practices to redcue youth unemployment: watching the video of the Relay Race held in Palermo, you will see that these are not just good intentions, but a concrete, fruitful reality.