One of the first thing that strake you as you arrived in Beirut is the massive presence of soldiers, check points are spread all around the city, as well as around the all country. The awesome deployment of soldiers, a great employment of barbed wire and anti-breakage barriers, had a great impact on my mind and I started to imagine Lebanon as a big fortress.  It happens often in the simplest circumstances of daily life – take a bus, travel with a car or a taxi – to spot checkpoints with a large number of militaries and small flags with the inscription “Jaysh  Lubnān”  “Lebanese army”.

Despite the fact that Beirut looks as a  large,  modern metropolis with every comfort,  the proliferation of checkpoints and controls in almost every area and neighborhood, make the same town take on the appearance of a giant “military box”.  Control procedures are usually quite quick (a look at the passports, and maybe a few questions about the reason of your presence in Lebanon), but still the whole atmosphere is perceived, through the eyes of a foreigner, as  heavy and, in some ways, forced.

Despite the foreign observer perceives the overabundance of military controls as something abnormal and strange, observing the military armed to the teeth going around the streets of Beirut also exudes an unusual air of normality : Lebanese citizens seem to oscillate between  a passive acceptance of the status quo (“this is the situation and cannot be changed”) and a kind of gratitude for the presence of the Army  that, in a context of unstable government authorities and fear for what is happening in neighboring countries , provides some assurance –  or at least a semblance – of protection and safety.

The use of military checkpoints is not only limited to the control of the border areas , but, being employed widely even within Beirut, it  multiply and amplify its internal boundaries, taking the form and the role of a control device for immigration, especially among the many Syrian and Palestinian refugees, who are often living  in the city since many years, but  still in a marginalized condition, since the equality of  rights is not yet recognized for them.

The increasing control of borders and their multiplication in and outside the countries reflects in my opinion a general trend in the international migration management. Check points are actually working in Beirut as real border for an amount of people without documents living in the refugee camps in Lebanon further limiting the free of movement of a lot of people now residing in the country. The great enforcement of the border control and of the ongoing securitization process, justified by the Syrian crisis, propagated as a security threat, not only became a tool for the government to canalize popular resentment toward a xenophobic or racist victimization of  Syrian refugees, but above all it works as a device of discrimination that produces different status connected with different access to the rights, and make migrant people vulnerable to different practices of exploitation. 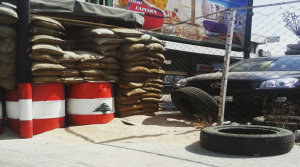 Stemming from this consideration, what seems clear to me is that borders are not acting as mere barriers and the border management has not as main goal to prevent or block human mobility once for all, rather both are devices to create differentiated degrees of inclusion, that means differentiated access to the rights and vulnerability to the exploitation.  Border becomes a tool of inclusion which select and filter people through a process that includes different forms of violence, that have nothing to envy to those employed in exclusionary measures.

All these considerations about securitization and border management directly remind me to Europe, where the new policy regarding border management is sharply connected with the restrictive spirit of contemporary migration policies. The border politics implemented by Europe and the whole discourse about migration as a threat in term of security, national identity and welfare, has a lot in common with what is going on in Lebanon. European borders are more and more controlled: increasing patrol agents today can rely on technological and advanced equipment; new actors are implemented in the border control, but still, the idea which run under all these new ways of control, is not to avoid migration rather to articulate and manage it, to create exceptional space where the rights can be not recognized and suspended in an eternal limb.

The institutionalization of the border management in the Mediterranean sea is a clear symptom of this process of border enforcing, but then it should be recognized that this process has always to face with the challenges put into practice by migrants who every day break this order, forcing the politics of control to come in term  with the practices of migration that structurally exceeds its re-bordering  methods. What I would like to underline is the importance to recognize the border not as something fixed once for all, rather as a place of tension between denial and access, mobility and immobilization.

Considering the power of border not only in negative term provide with the possibility to situate the new control politics within wider logics of governmentality and management as well as it allows us not to look at migrants just as needy people but as new emerging political subjectivities. It provide with the possibility to go beyond  the worn-out securitarian and humanitarian rhetoric, making more intelligible a phenomenon that becomes more and more important on a world-scale, and that contributes to organize and to structure different spheres of our lives.