Beginning of September, Palermo shows its beauties on a shining sunlight. A soft breeze coming from the sea cool down the heat and suddenly everything looks just perfect. It’s our rendezvous. We left each other only few weeks before but it seems so far ago, another life perhaps, another place for sure. Beirut, Amman, Birzeit used to be our homes and now Palermo is going to replace them for the next three months.

We look funny with our big luggage, perfectly mixed up with the dozens of tourists surrounding us. But we’re not tourists, not today. Among clothes, shoes and other personal effects, we also brought ‘nduja, taralli and other basic supplies we missed abroad and that we now need as fresh air. Each one of us had chosen something typical from its region with the clear idea of sharing it with the others. That’s us, there are no mistakes. We just look somehow different. Maybe it’s our clothes: eventually we had the chance to make a renewal of our wardrobe and we’re not used to see each other with a new shirt or a different pair of jeans. Some of us went to the barber shop and now are showing a new haircut too. Yet, we still look different, you would tell there’s something on our faces this time we didn’t have that day we said “see you soon” one month earlier.

“How are you? What did you do back home? It’s nice to see you again!”

That’s us, pretending nothing has changed. Same old jokes, same old laughs, but they’re just a little less funnier and spontaneous than they used to be. And an embarrassing silence suddenly comes by, a silence we had never experienced before. It seems we know each other so well that we don’t have anything new to say. But our eyes speak for us, and they tell  things only we can understand: they speak about the places we have been, our experiences, the people we have met. It’s the way we look at us that is changed. “Do you remember when… ?” 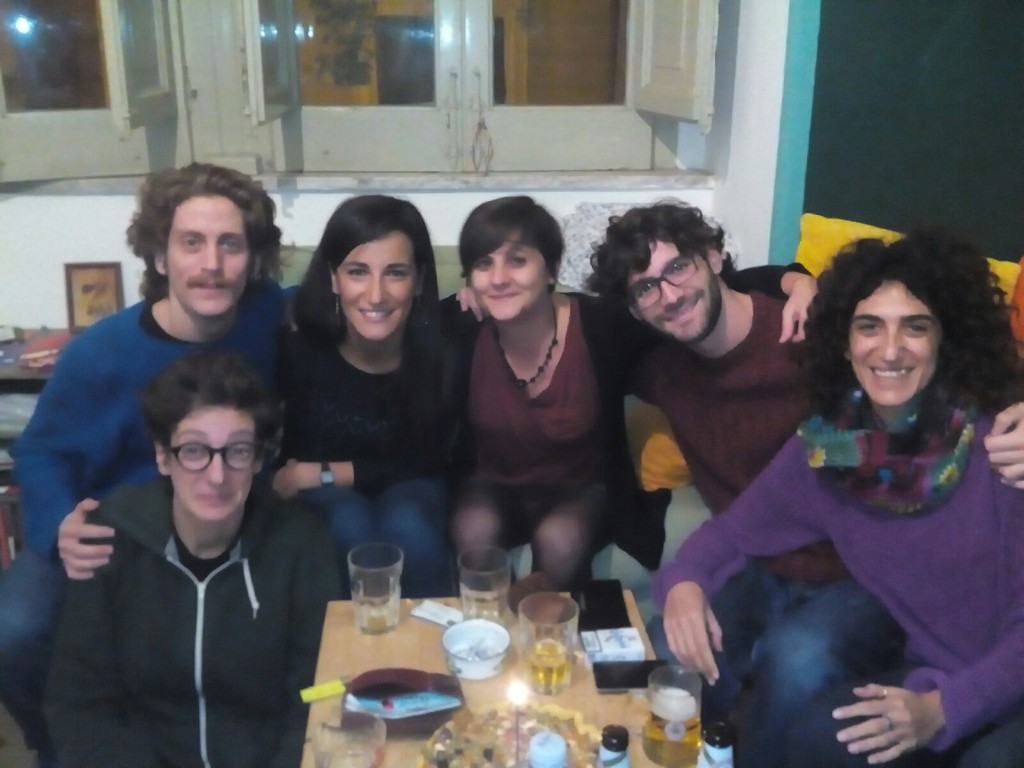 That’s it. Of course we remember, our memories are still fresh, our old routines are still vivid in our minds, but they’re over and we can’t resign to this basic, simple truth. We left each other with the pledge of keep going and now we find ourselves lost in this melancholic state we just can’t let go.

“Let’s go for a coffee”, Mario says. He was in Jordan with Alessia and Antea and he has a talent for saying always the right thing at the right moment. A coffee and a relaxed chat in a nice and not-so-crowded bar are all we were longing to let ourselves loose that much we needed. And the river starts flowing again as it used to: “What have you planned to do in the next months? Have you heard that news? What do you think about it?”

If there’s something we truly love that is chatting: we could speak about everything for ages, no matter the topic. Once we got stuck discussing about “shaving” for about a couple of hours (and our unfair balance with the girls-to-boys ratio helped a lot); with “food” or “music” we usually go even beyond that limit, but most of the time what we talk about are work related topics or opinions on general life subjects. For as many jokes we would ever do to each other, the truth is that we have a really high mutual esteem and we take into deep account our different views. Even when we don’t agree on something, which happens often, we usually dig enough (that means we waste that much time needed) to reach a common point after that nobody has nothing more to say.

From an outer point of view we might seem sick, and we would also agree on that. One of our colleague at work once said: “You guys are amazing, you are kind of a guild: no matter what you are doing, no matter to whom you are speaking with, whenever you find some of you ‘Cabureri’, you move toward him, or most likely her, almost unconsciously, as if there is a special gravity at work only for you”. And we all know it’s true.

Our base is in via Sampolo, intercom “Liberty House”. This is the place where those of us who are not from Palermo live. It’s a nice old style building and we are five (we used to be six but Rosa had to go back to Napoli earlier due to hers university commitments). Even though we are all different, with different life cycles and interests, astonishingly we get along very well and we’ve hardly had any serious quarrel, so far. From time to time, usually on Friday, we organize a big dinner open to friends that normally shifts close to a cooking competition: we are all really proud of our cooking skills and we can’t wait to prove it every time we can (except for Dario, he’s not even able to boil a potato). Those nights often ends with laughs and empty glasses of wine. Sometimes our neighbour appear at the door to share some of her complaints, we apologize and life keeps flowing as if nothing happened.

At home we have our rites. We follow a strict schedule on who has to put some music on and you will hardly listen to the same song twice: we move from Arabic to Latin music and from Italian songs to Electronic or Jazz sometimes. Garbage is a male thing and a late night briscola decides who between Mario and Dario is going to throw it away, even though recently Luisa brought some new games saving us from this vicious circle. Alessia needs hugs, don’t ask why while Federica has a thing with cactus and tea, so we all started collecting both. Rosa was the kitchen coordinator and since she left our meals are a bit messed up, but luckily, every now and then, Valentina goes to Catania and she brings back a lot of food: those are happy days. To express this harmony we chose the Guayabita as our anthem (an old Colombian traditional melody) which instantly loose our daily stress and put us in a happy mood.

Days pass by, seasons as well. Now Palermo is getting colder, rainy and nights come earlier, but its beauty still remains. We already know this feeling, it’s the same we experienced last summer: our time is almost over, once again. What will remain of this experience? Of our relationship? Will our neighbours miss us?

We know what will never change: that glance in our eyes every time we will meet again in the future. Those eyes will always make you understand that there has been a story our lips would never be able to tell. And we already apologize because of this but it’s not our fault, that’s what we are: a family.