Thessaloniki is considered to be the second biggest city in Greece and it is the capital of Macedonia Region, and considered as the city of youth because it has two famous and big universities (Aristotelous and Macedonia). Also, you can notice the multi-cultural si

tes that have the roots of Byzantine, Ottoman and Greek periods.

Our Thessalonikian experience started with the crowded busy train that we took to reach this amazing city. However, all tickets were sold out we booked tickets with no seats just to have the chance to visit this city.

The first day started with a delicious Greek breakfast specifically with a pastry called ‘Boughatsa’ then we had the chance to visit the ‘White Tower’ that consists of four floors full of history about the periods of Thessaloniki, the roof has the best view of the city and the sea. We continued our day with a nice walk on the reconstructed waterfront path. One of the well noticed views in the city is the beautiful squares such as ‘Aristotelis and Alexander the Great squares’, and the parallel streets which allows you to see the important touristic and historic sites one after the other. 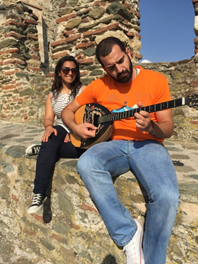 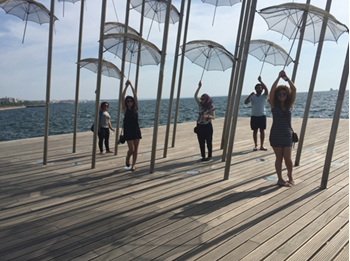 The second day we had a round in the students assembling points like the Bit Bazar which is an area full of cafés and restaurants especially for students. Then we paid a visit to top of a tall hill overlooking the city that has the kastro (castle) whose walls surround the inner cita 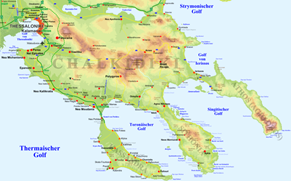 del of  ‘Eptapyrgio’, fortunately we saw a Greek guy with his Bouzouki and one guy of our group asked him if he can use his bouzouki, and he played some Arabic music on a Greek instrument on the Edge of the castle which helped us to complete the story of multi-cultural experience,  we ended that day with a rest in a Krete specialised restaurant, finally the good news was that we had a good comfortable trip back to Athens with plenty of seats.

Moreover, near Thessaloniki you can find the heaven on earth … ‘Chalkidiki’ has the best beaches in Greece, crystal clear water, and breath taking views, on the map it looks like the devils fork, so it has three legs as what they call it, every leg has its speciality, at the first leg to the west side you can find the best night life, and the youth style places, the second has the relaxing mood and the family type places, and the third has its own boarders, it contains a big number of monasteries and they are self-authorised by the Greek Orthodox church. Thessalonikians are highly proud of having this area, that they also have a very familiar joke, about a Thessalonikian man that had passed away, and he went to heaven, so one of the angles took him for a tour to show him the special places in heaven with the good views, and after that they were done from the tour he asked him ‘do you like those places? Aren’t they amazing? The man said ‘Mmmm … yes for sure I liked them, they are amazing, but there is nothing as amazing as Chalkidiki. 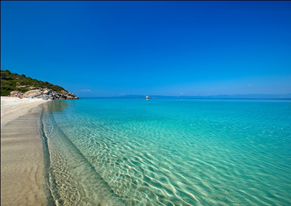 At the end there is a saying to express the warmness of Thessaloniki and its people, which were said by ‘Nikiforos Choumnos who was a Byzantine scholar and official of the early Palaiologan period, which says: ‘κανείς δε μένει χωρίς πατρίδα όσο θα υπάρχει η Θεσσαλονίκη’’ which means no one is left without a homeland as long as Thessaloniki exists